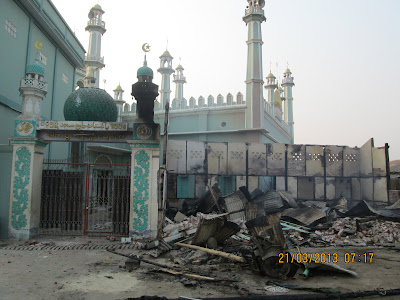 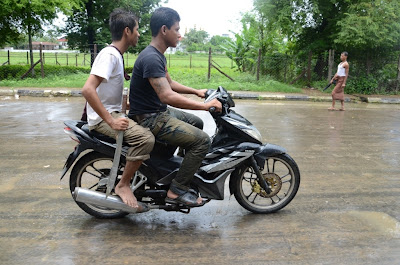 Rakhine driving around Sittwe June 2012 at time of first attack.

We are being followed. Everyone we speak to is then in turn spoken to. We are being watched, our movements, what we buy, what we say, what we eat. The regime is scared of something.

In Sittwe where the Rohingya Muslims were murdered last year the attitude towards us has further darkened. Some of the local Rakhine women, who first received us with smiles and waves, possibly thinking we were tourists, now have dropped all the niceties after word has gotten around that we are visiting the Rohingya IDP camps.

I have become increasingly aware that my skin complexion makes me seem less of a Westerner than others around me, especially now that I am being associated with the Muslim Rohingya.

We took a walk to the local internet café in the Rakhine part of town where we are staying. That night as we walked a man said “Why don’t you guys go down here,” pointing towards a side road. The last remaining Rohingya ward, surrounded by barbed wire and guns, is in that direction. We politely said “No, thank you,” and moved on. On the way back he said it again, looking me directly in the eyes, but this time adding, “The Muslims are down there.”

Further up the road a man pulls up next to us whilst we are walking back to our guesthouse and aggressively asks, “Where are you going?” We answer, “Our guest house,” and he continues to speak aggressively and coldly.

“Come with me!” he demands. At any point I was expecting him to pull out a police badge or even attack. We say, “No thank you,” he drives off and shouts some words that we do not understand.

Associating with Rohingya is very dangerous. The local Rakhine do not like it, and neither do the authorities. The Rohingya are who we are here to see.

Last night as I returned to my hotel, a man signalled at me whilst talking to another man and called me a “Rohingya”. The implication is clear; the brown guy is a Muslim, Rohingya, the same as the people they massacred and continue to persecute today. I see men riding on the back of motorcycles at night whilst carrying long blades, the same blades, maybe, that were involved in the hacking of the Rohingya, including children, last year.

Men on motorcycles follow us. Thuggish looking men, overly fed and built, wait outside our hotel, constantly informing someone on the phone of when we leave and come back. Men sit close to us when we have dinner. Our hotel that advertises wifi internet connection suddenly has connection problems, we are unable to contact the outside world via the net. What are they preventing from getting out?

Local Rakhine, who attempt to help the Rohingya, or try and bring goods into the camp markets face being ostracised. Last week, three such Rakhine were beat up in the Rakhine part of town then forced to wear and parade around with signs calling them traitors. They are considered traitors or ‘kalar’ lovers. Kalar is a racist term that is used for the Rohingya and other Muslim minorities in Burma.

Although the attitude towards us has changed, it is nothing compared to what the Rohingya face. I am a foreigner. I was born In England and because of that I am a British citizen with all the rights and protection that come along with my nationality. The British consulate is about an hour’s plane ride away and could be on hand to help if need be. I have the option of flying out; I have the protection and privilege that a foreigner usually has.

The Rohingya have no such protection. They cannot leave their areas as the military impose curfews and roadblocks. The Rohingya cannot fly out of the airport; they don’t have passports or travel documents. They have to pay and apply to the police and military for official permission to leave their villages, wards and camp restricted areas. The Rohingya are always watched and tracked. Their only escape is to risk death by going out to sea or escape by death itself, not much of a choice. They continue to live in imposed sub-human conditions because they are not recognised as Burmese citizens, not even recognised as human with simple and basic human rights.

The Rohingya that talk to me risk their lives. Even in the IDP camps we are being watched and followed. If the regime so wants, anyone that talks to us can end up in a jail, tortured or just disappear. The Rohingya we meet are brave and loving people. A day has not gone past that we have not been received with hospitality, access to their lives and harrowing accounts. We will soon leave; the Rohingya will continue to endure.