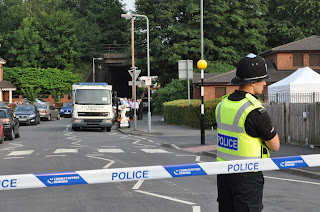 Police are treating a blast near a mosque in Tipton, West Midlands, as a terrorist incident.

The blast near the Kanz-ul-Iman took place around 1:00 pm and police are currently at the scene.

Residents reported finding debris in their gardens including nails.

One resident, wishing not to be named said, “My house is about 40 yards away from the mosque.”

“I saw the cloud of smoke after the extremely loud bang.”

“The backdoor to the living room was open when the explosion happened, a nail landed inside our living room.”

The Friday prayers at the mosque were moved back because of the Muslim holy month of Ramadhan, where Muslims refrain from food and water during daylight hours.  The mosque would have been full during Friday prayers but people had not begun to arrive at the time of the blast.

Asked if they saw anything suspicious leading up to the explosion the resident told me “ I saw three young white men in their mid 20’s walking away from the mosque.” 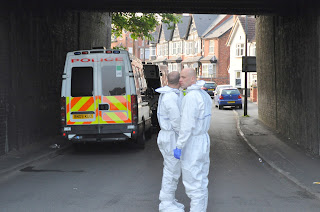 “They were well kept, were wearing sunglasses and shorts, they looked suspicious because they were peering into the houses as they walked past”

“They just looked out of place.” She added

The explosion is reported to have taken place in the Mosque car park.  Surrounding roads remain closed off in what police say is a ‘precautionary measure’.  Some residents have also been evacuated from their homes as police forensic teams are on the scene investigating the incident. 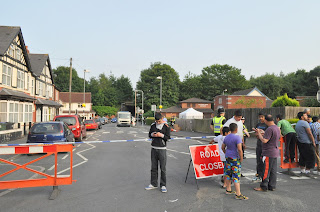 Police spokesman Gareth Cann, told media that the Police have called in the army to make sure the area is safe adding “this is possibly an act of terrorism.” He cited a number of factors, including the explosion, location and the fact that police discovered debris in the surrounding area.