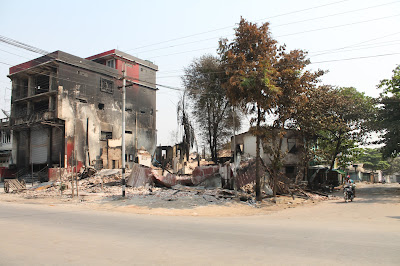 A burnt property in Meiktila following attacks on Muslims,March 2013.
photo by Hein Aung

Following recent attacks in central Myanmar against Muslims, the displaced have been fleeing to the central city of Mandalay. Buildings were burnt down and the ‘official’ death toll stood at 32, as angry mobs roamed the streets. The reality of events is very different from what we have heard on our TV screens. Burmese state media is not the most reliable of sources and very few independent or Western journalists have reported directly from the ground.

The displaced are scattered across the city, accommodated by fellow Muslims and are still very scared to return to their homes in Meiktila, a hundred miles away.

I traversed through side streets to the site of one building housing the displaced. Young men stood guard, looking wary and suspect. After a long discussion we were allowed in to interview some of the refugees, they asked for their faces to be blurred out on camera. The metal gates to the building were unlocked and we were allowed in.

Hafiz, a seventeen-year-old student, had been in school at the time when the violence began. His teacher told him to run,

“we ran, we saw the younger children falling over, the older kids had to help them,” he said, recalling his account. “We hid, and then moved from place to place until we were rescued and brought here. I’m not sure where some of my other friends are.”

He looked around to his classmates in the small open space opposite a mosque in the mainly Muslim district of Mandalay. I showed him some pictures from a local journalist; two of them were of dead teenagers. He put his hand up to the camera touching the screen,

We showed him another and he struggles to speak

“and this one, those are Osama and Karimullah,”

he paused; his friends surrounded the camera and inspected the pictures of bodies on the ground, in unnatural poses. 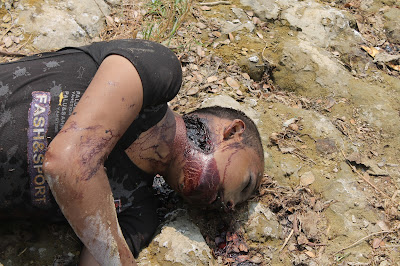 One body, Osama’s, has a massive gash to the back of the neck, which looks like it was caused by a machete. The other boy had a massive laceration in a similar place, both bodies had been there for three days before a local journalist, Hein Aung, took the pictures. They are too graphic to print. The class mates consoled each other, two friends lost. The pictures confirm their fears, but there are still friends unaccounted for, but we have no more pictures that can be identified, the rest are of burnt corpses. Not that that was a comfort to these young men, to anyone. Nearby, one hundred and five year old Kairunbi, laid on the floor, exhausted. Her seventy-one year-old daughter watched over her.

“We had to use a stretcher to get her here,” she told me. “We will go back when it is safe to do so,” she added. “We could be here for a while.”

Muslims have long been an oppressed minority in Myanmar. Last year’s massacre of the Rohingya Muslims caused outrage in the Muslim world but the Western media gave it little attention. The Rohingya are not recognised as Burmese citizens. The darling of the West Aung San Suukyi, a former political prisoner, democracy advocate, and current member of the Burmese Parliament, remained silent when asked about the Rohingya, an action further cementing their fate, as the leader of democracy in Burma refrained to speak out for their freedom.

This time, the Muslims are Burmese citizens, not Rohingya, but this did not stop them from being attacked. Every person interviewed said that the police stood by and did nothing whilst they were being attacked. Many here believe that this was pre-planned and that the official story, that it began with a dispute in a gold shop, is just a cover for violence against Muslims. The extremist Buddhist monk, Wirathu, had only given one of his sermons ten days before the violence. His group, 969, is infamous for their extreme views and protests against Muslims who they call ‘invaders’ and ‘Kalar’ – a racist term used to describe Muslims. He is known in the country for his anti-Muslim stance, he has even published a book called ‘From the jaws of a wolf”, which tells a story of a Buddhist woman married to an abusive Muslim man.

We continued throughout Mandalay, interviewing person after person displaced by the riots. But this violence was different from that in the Arakan state last year, although the anti-Muslim sentiment was the same. This time, local Buddhists and student groups from nearby Mandalay city launched a rescue operation saving hundreds of lives. The local Buddhists from Mandalay city, who have lived side by side with Muslims for centuries, were not prepared to have their neighbours slaughtered.

Myint Myint, who was saved by a Buddhist monk, said she blames the Buddhists in Meiktila, not the ones in Mandalay. Her nephew, Farooq, aged just fourteen, saw people beaten to death and then burnt. His voice crackled recalling the events, he and others hid in some houses and looked on as the slaughter took place. None of the above interviewed wanted their face on camera; they fear reprisals from extremist Buddhists if they are found out to have spoken to a foreign journalist.

Khin Htay Yee, was not afraid, though. She broke down in tears as she recalled how her Buddhist factory manager sheltered them in the factory as the slaughter took place outside. The mob outside threatened the manager that if he did not let the women out that they would break in and rape every last woman. She managed to make a phone call to Mandalay where some Buddhist monks had already left to rescue Muslims from the onslaught of the enraged mob.

The violence took place over three days and only stopped once the army came in and restored order to the streets. The majority of the displaced are still being kept in a sports stadium in Meiktila, guarded by the military.

Muslims in Burma are now afraid that the violence will spread even further and there is even a strong indication, due to protests, leaflets and military movement that a third massacre against the Rohingya Muslims in Arakan is planned for the coming days. The language of propaganda is reminiscent of that in the Balkans before the Bosnian genocide, Muslims are accused of invading, of waging jihad, of acts of violence against Buddhists, but many here believe that the military is behind the increase in violence, something Human Rights Watch pointed out in their report on the violence in Arakan last year accusing the military of complicity in the massacre. The Burmese military junta ruled Burma until recent political reforms, which has opened up the country somewhat to the West.

A Muslim in Yangon told me

“the military want to assert their power, and want to prove they are the ones that can restore order, they are using us to prove their point.”

If this is the case, then we will see more deaths in the coming weeks.

2 thoughts on “Massacre in Meiktila: That was my friend”