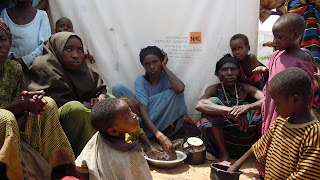 The look in her eyes tells me all I need to know about what had happened. Even before I ask her, I know she has lost a child. It is a familiar look, one that I have seen, as a journalist, in the eyes of mothers in Pakistan, Bosnia, Palestine and now in this IDP camp in Somalia. But never has it been so raw, so real and so striking.

Jameela Ali lost her two-year-old daughter, Habiba in the morning. Habiba died of measles. Jameela had two children, she tells me that her three-year-old son has also died. Robbiy died in the last month, also of measles. Jameela’s eyes are bloodshot, she has been crying. When I ask Jameela how old she is, she replies, “twenty-two” in a low tone. At the age of twenty-two, Jameela has lost both her children, is living in an IDP camp and has left her home in Bakul, having travelled three days to get to Mogadishu.

The IDP camp is crammed; there is hardly any room to move. Part of the camp is in a derelict building, but the lower walls no longer exsist, the pillars are the only thing that is holding it up. It is a wreck, a destroyed building, but for people without a home it offers a tiny form of cover although it is nowhere near enough. Children lie on the floor asleep for hunger is easier to bear if you sleep. The camp has become the fly capital of the world. There are flies everywhere. A child sleeps on the floor, his face covered with flies; I count at least ten.

How many cases am I to document? I move through the camp, coming across case upon case of malnutrition, measles, chest infections. I do not know what to film, there is too much. There is a constant sound of children crying like the humming of an engine. It becomes normal, the odd sharp, high pitched cry reminding you that it is not normal, it is not meant to be normal and it shouldn’t be normal. The cries are not of children protesting because they do not have toys or cannot watch their favourite cartoon on TV; they are cries of hunger, suffering and pain. I can still hear the cries as I write this, like a constant throbbing sound in the back of my head. The children are probably still crying now, their needs unmet.

Abdul Qadir is not crying. He clings to his grandmother Mumin, tucks his head neatly under her breast and looks, intently, at her face. Only a year old and he is malnourished. After the death of his mother he is now being looked after by his grandmother.

“We lost our animals and had to leave our farm, we have no hope,” says Mumin, looking at her malnourished grandchild. His father Ma’ani looks over him. Mumin now has five children to look after, Abdul Qadir is the weakest. His silence is striking amongst the cries of the camp. It is a sorrowful silence, a silence that can only be understood by a mother, a silence that is looking for his mother, a mother who will never return. The family travelled for three days on foot to reach Mogadishu. They receive a small amount of rice a day from the local community. I have not seen an international NGO here yet; we are the first to arrive. We bring with us hope. But I have only brought a camera and my notepad.

The stories of loss do not stop. Abdi Ibrahim Yunus has lost five children to measles in the space of three days. Abdi looks malnourished, he tells me he is forty-eight but he looks like a little boy, no meat on his body, his skinny arms and legs reveal the extent of his weakness. He has one child left, covered in a flowery cloth, he lies on the floor. The cloth is a barrier to the flies, but it will not offer much protection against measles or hunger.

The camp is a maze of tents, little igloo like structures, made out of wooden sticks that bend and are tied at the top. These tents are tiny; you have to crawl to climb inside. They offer no protection from the rain. There is no sanitation here, there are no toilets. The camp stretches across the road and up a hill, the stench of human faeces hits us as we begin to climb up the maze.

Gabo is sitting on the side of the path in front of her tent. Crouching on the floor, her face rests in her hands. She looks at me, I recognise that look in her eyes, the same look that I had seen in Jameela’s eyes earlier.

“My son died, they have taken him to be buried,” she tells me without moving. Gabo had four children, she has two left. Another son died of hunger on the way to Mogadishu.

“I buried him on the way,” she says before solemnly settling back into her mourning state.

There are over one thousand people in this camp. There will be new arrivals, and there will be more dead children as each day passes. I am set to see the all too familiar look of sorrow in women’s eyes in the days to come as the only visitor in these camps seems to be death.