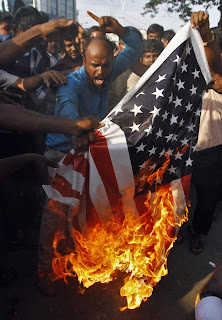 Demonstrations have spread around the world after an anti-Islam video, made by someone named Nakoula Basseley Nakoula, insulting the most revered figure of the Muslim world, the Prophet Muhammed was posted on youtube.

Why is it that this short video, apparently the work of one insignificant individual, can instigate such outrage?  While the filmmaker and his ilk may be a global minority, for Muslims, as well as for much of the rest of the world, they epitomise the ignorance, imperialism and arrogance of the West in its dealings with the Muslim world.

The origins of the film itself are very dubious, its production values are such, that it looks like it was made in a basement.   The insults to Islam or the Prophet Muhammed are obviously dubbed over the original soundtrack.   The film seems to have intended provocation based on some aspect of an apocalyptic ideology.

Today, as in the past, Muslims remain part of a global brotherhood that is unlike anything that exists in the West. This ‘Ummah’, the wider Muslim community, transcends political borders, artificial boundaries and international time zones.  Yet, what the West apparently finds so hard to understand is that Muslims continue to have a sense of the sacred along with a respect for the concept of community as well as brother and sisterhood.  For these Muslims the Prophet Muhammed is sacred.

As a result of the outrage caused by this video it is now possible to see even the simplest, poorest and non-political Muslim take to the streets, as they would rather see their families shamed by such public behaviour than have their religion, which they continue to hold sacred, insulted.  Even the corrupt, pro-Western, Muslim leaders recognise this, accepting that they have to speak out against any attacks on the sanctity of their religion, as their own seat of power would be in grave danger if they did not. It appears that the American establishment has been caught off guard, as is evident by its slow reaction to label the video ‘disgusting’ and ‘reprehensible’.

Middle-class Muslims and non-Muslims alike talk of how Muslims should rise above the prejudice.  It is not that simple since most Muslims do not come from the privileged positions necessary for such a stance. One look at the literacy rates for Afghanistan, as well as the rates at which literacy levels have fallen in Iraq since the US invasion, shows that Western intervention results in people having to choose between eating and sending their children to school.  The mass education that we receive in the West is not widely available to others around the world, while, in the West we are not usually confronted by an occupational force of foreign troops every time we leave our homes or the daily psychological trauma of imminent death.

While American and British troops continue fighting a war in Afghanistan, which, along with the war in Iraq and the occupation of Palestine, encourages a feeling of helplessness across the Islamic world, many Muslims ask, ‘how can we help each other and unite the Ummah?’  These are the Muslims who feel they are being globally humiliated by the policies of western governments and, with the aid of 24-hour ‘impartial’ news, their humiliation is beamed un-sanitised into homes around the world 24/7, for all to see and none to escape.

Now with Muslim lands not to mention hearts and minds being occupied, along with constant attacks in the press, a perceived loss of Islamic self identity has taken hold. Is it any surprise that Muslims who see the central figure of their religion being insulted and mocked should feel dehumanised even further?

Many of these Muslims feel that they have no option but to take to the streets in order to express their anger and frustration.  They are fighting for what they feel is right, for what they believe in and are taking it out on any symbol of Western imperialism – embassies being the primary targets.

These are the same Muslims who felt helpless when images of prisoner abuse emerged from the void of Abu Ghuraib.  They are the ones who felt helpless when half a million people, or more, were killed in Iraq with millions more displaced.  Helpless as Israel bombed Lebanon and Gaza and their Arab leaders belly danced around the West. Their sense of helplessness compounded as drone attacks plague Pakistan and the international blight of Guantanamo stays open for business.  Helpless as the infamous Danish cartoons printed in the name of freedom of expression spread around the world like a virus. Helpless in the face of Kashmir’s continued occupation.   Helpless as Bosnian women, violated and brutalised in rape camps, are denied an international forum to voice their anguish.   Helpless as a flattened Grozny struggles to its feet. Helpless as America carries out drone attacks, breaching the national sovereignty of independent countries with impunity.  Helpless as Switzerland, home to 400,000 Muslims, bans the building of minarets.  Helpless as France bans the hijab from schools.  These are the Muslims who feel helpless in every way imaginable.  Is it any wonder that there is so much anger and frustration across the Islamic world? Is it wrong for humiliated and insulted Muslims to react so passionately? As the most revered figure of their religion is insulted and their lands are stolen. Or should we bring up the United States anti-terrorism,interrogation techniques such as water boarding or the many other forms of state sanctioned torture for good measure?

With the media’s shouts of ‘revolution’ still ringing in our ears when Muslims recently demonstrated against their own oppressive governments, the media now shouts something different as these same Muslims protest.  When these Muslims react the media cries ‘barbaric’ and ‘savage’;  Eurocentric and orientalist terms that were strangely absent from public discourse during America’s ‘shock and awe’ campaign in Iraq.

Imperialistic wars have seen the Muslim lands divided as arbitrary lines were drawn on maps by the Western powers with no consideration for the local people, while their religious institutions were dismantled and their cultures destroyed.  Tyrannical leaders were then imposed on the population with an American or Western seal of approval.  History has continually demonstrated that there is only one objective of imperialism, the exploitation of the lands natural resources which is usually facilitated by the facade of stability, democracy and freedom.
div>

The humiliation of the contemporary Muslim world, as some see it, has taken place, largely in the last century. What the imperialistic governments in the West must realise is that occupying countries and killing civilians is one thing, but to attack the religion, the sacred text and the Prophet, will bring out the masses onto the streets to fight. It will ignite the Islamic concept of ‘ghayra’, the idea that Muslims love something so much that they are willing to fight and die for it.

It remains the arrogance of the West, where there is nothing really sacred anymore, to demand that everyone in the world abandon their religious beliefs in the name of civilisation and progress.  While it has long been ‘funny’ to joke and mock the Christian prophet and disrespect the holy texts of Christianity, this idea is completely foreign and abhorrent to Muslims. Mocking what is held sacred has not been legitimised and integrated into the culture of the Islamic world.

This video has not come out of nowhere; it is a manifestation of the environment created by the so-called ‘war on terror’. The Islamaphobia used by Western leaders to justify their wars has sparked the flames of this fire. That is why Muslims across the world will find it hard to differentiate between one crazy filmmaker and the American government as a whole. This film is a product of the environment created by America, and maybe the fire, the venom, and intolerance has become uncontrollable.