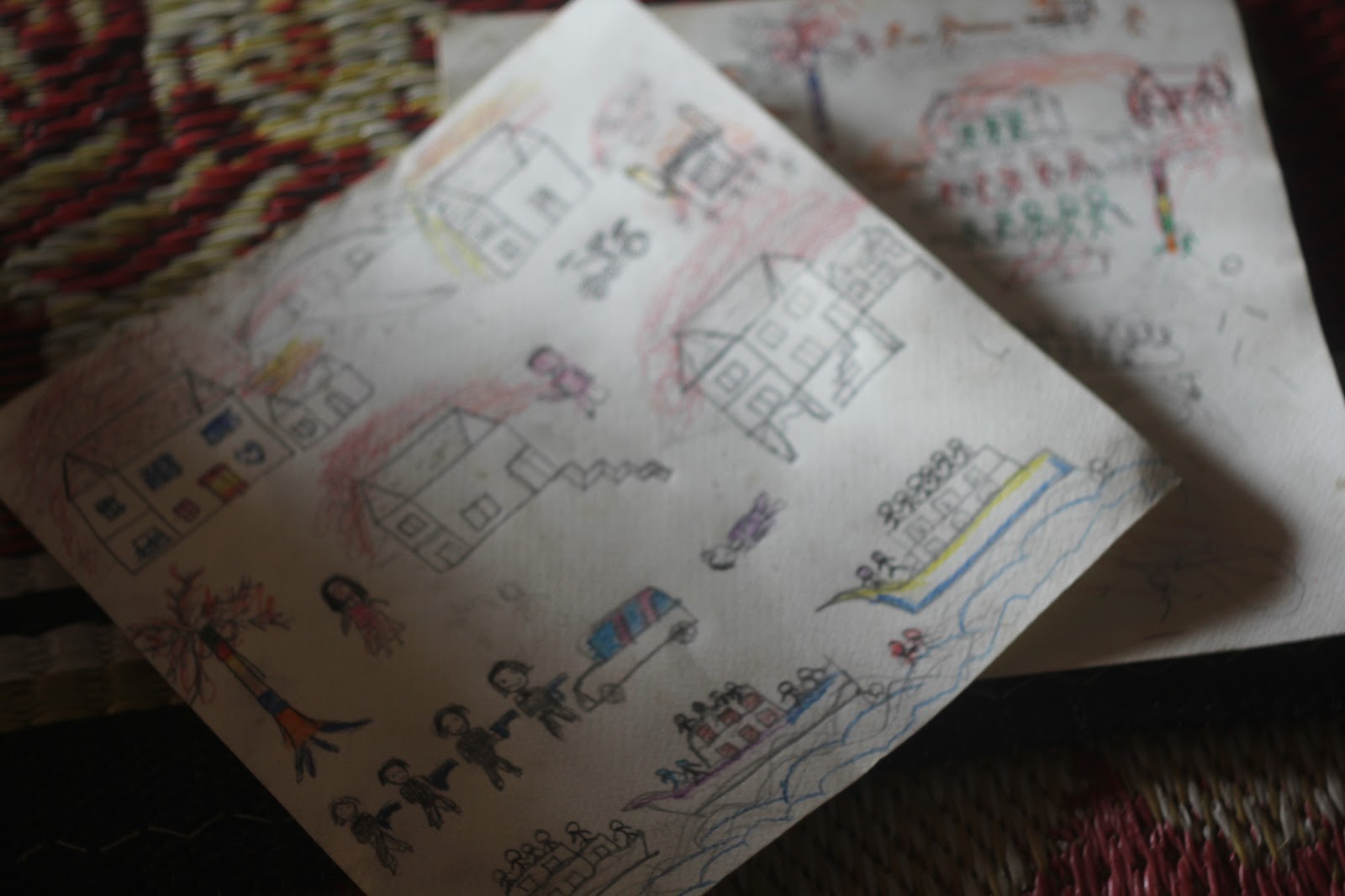 Muhammed sits sketching a stick man and then he picks up a green pencil crayon, colouring in the man he has drawn. No one has bothered to ask these children about what they witnessed during last year’s massacre of the Rohingya in Burma. No one seems to care what children have to say.

Ten or so children sit in a bamboo hut, in what is now a make-shift Rohingya village at the end of a dusty road. The village is nothing but a collection of huts and tents put up in sand. This is not where these children are originally from, they were forced here after they were chased to the water amid sword, spear and gun attacks while their homes in the Kyauk Phyu village were burnt down last year.

The sun beats down; the children surround us, wanting to see the foreigners. The American doctor, (I won’t reveal her name for her protection) works with the Rohingya and pays special attention to these children. She seems like the only one that wants to hear what they have to say.

They are all drawing away, boys and girls. Then they hold up their drawings and share their stories with the rest of the class. Some children look-in from outside, through the cracks in the bamboo and the plastic sheeting that covers the outside, peering in to see something and hear something that no-doubt they have heard before. But now, it is being shared in a manner that it has not been shared previously.

Abdul is mute. This is his first time drawing and he is eleven. His drawings are detailed. They show death, houses burning, soldiers, monks and local Rakhine carrying weapons. All the drawings are similar; they all show things that children should not be subjected to.

The children’s accounts are vivid and graphic. They all say they saw people hacked into pieces. In one drawing Hussain draws a stick man, with his heads, arms and legs separated, he says he saw someone chopped to pieces. There are bodies in red water.

“I saw dead people in the water, I saw Rakhine stab them whilst they were trying to swim.”

That’s why the colour of the water is red.

All of the children are still scared, they have been dispelled with deadly force out of their village, and their homes burnt to the ground, all of them told me that they suffer from nightmares. Even in their sleep they cannot escape the horror of what took place. Of how the military, monks and civilians slaughtered Rohingya and drove them out, now forced to live in IDP camps, cut off from the rest of the world. They are not allowed to leave the area. The Rakhine on the other hand have no such restrictions.

He doesn’t smile. Sharp face and defined features, his eyes are striking, they are painful to look into, wise beyond their years and have seen things that no human being should have to see. He explains how they ran from the sword wielding Monks.

“A boat was set on fire. People jumped into the river and tried swimming. The Rakhine came on boats and stabbed people with their spears as they tried swimming away.”

There was one disturbing story that a number of the children drew and explained to me. A mentally ill child, was killed, he was beheaded.

The picture that emerges after speaking to the children is that themilitary, the police, the monks and Rakhines were involved in the massacre last year. The doctor tells me that these children are suffering from Post Traumatic Stress disorder. One child has since saw a Rakhine man and passed out.

In one village, the water buffalos were late coming back. Whilst the children were playing, someone shouted, “they’re coming!” the children began to run and scream, they thought the mobs were returning to finish them off.

“These kids need a child psychiatrist,” the doctor tells me. “I’m doing what I can.”

The children have coloured in the monks orange, green for the military and police, and just black for the Rakhine mobs.

“The Rakhine and the mobs came first, then when some of our family defended themselves and fought back the army came in and shot them,” says Ramina.

She’s 13-years-old and acts like a woman twice her age. She is clearly the one that the children look up to, mature, controlled and has a sense of authority about her.

Abdul draws a bike amongst the death and destruction, he points to himself to indicate it belonged to him, and then rolls his hands forward symbolising the cycling of the feet. “Where is your bike now?” He waves his hand away, and pushes his arms back and forth like he is running; he had to leave it behind, a sullen sadness in his eyes.

The doctor lets the children take one pencil crayon each, their faces light up, smiles beaming, it is the first gift they have received in a while.Their childhood has been interrupted, simply because they are Rohingya. As soon as they were conceived they were destined to be persecuted by this state that professes to be moving towards democracy whilst actively engaging in the brutality and cleansing of the Rohingya.

The Rohingya are not recognised as citizens of Burma and have no rights. I suppose this fact is a mere inconvenience to World leaders and Corporation CEO’s as they compete for Burma’s natural resources. Human rights abuses are not spoken about when you have the potential to sign multi-million dollar deals.

2 thoughts on “Listen to the Children”